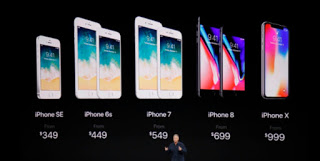 I am a techy guy, and they confused me. After standing in the T-mobile store for a few hours over two days, and trying to wrap my head around the Apple iPhone choices, I purchased my new iPhone 6s, because it was cheaper than the 7 and offered that handy-dandy headphone jack. It was the most phone for the least money. That was my rationale.

The truth is, I just gave up. I wasn't sure if there was going to be a 7s, or an 8s. I know there are Plus versions of them, but will there be a 7s Plus, or 8s Plus? What about the X? That's the number 10 in Roman numerals, where did the iPhone 9 go? Was there one that never made it of the lab? Will there be one? Will it be an IX? IXs? IXs Plus? Will the next iPhone after the X be XI, or 11? Wait! I have a brilliant idea. Apple should change is number scheme to hexadecimal. The iPhone XI or 11, would be the iPhone B, or iPhone b, whichever one is cooler. That's sure to eliminate the confusion.

Apple is now facing less than stellar iPhone 8 sales, and why wouldn't they? If someone needs a new iPhone now, they can still buy a 6 or 7, save some money, and wait for the iPhone X. It is available for pre-order on October 27th.